Giving kids in backyards across Alberta the highest quality of evidence-based care calls for constant innovation. Since 2007, the Stollery Children’s Hospital Foundation has invested more than $10 million in 155 pediatric mental health research projects through the Women and Children’s Health Research Institute (WCHRI) at the University of Alberta. Dr. Bukola Salami is a Foundation-funded researcher who is breaking new ground in her approach to providing the best possible mental health support for children and youth. 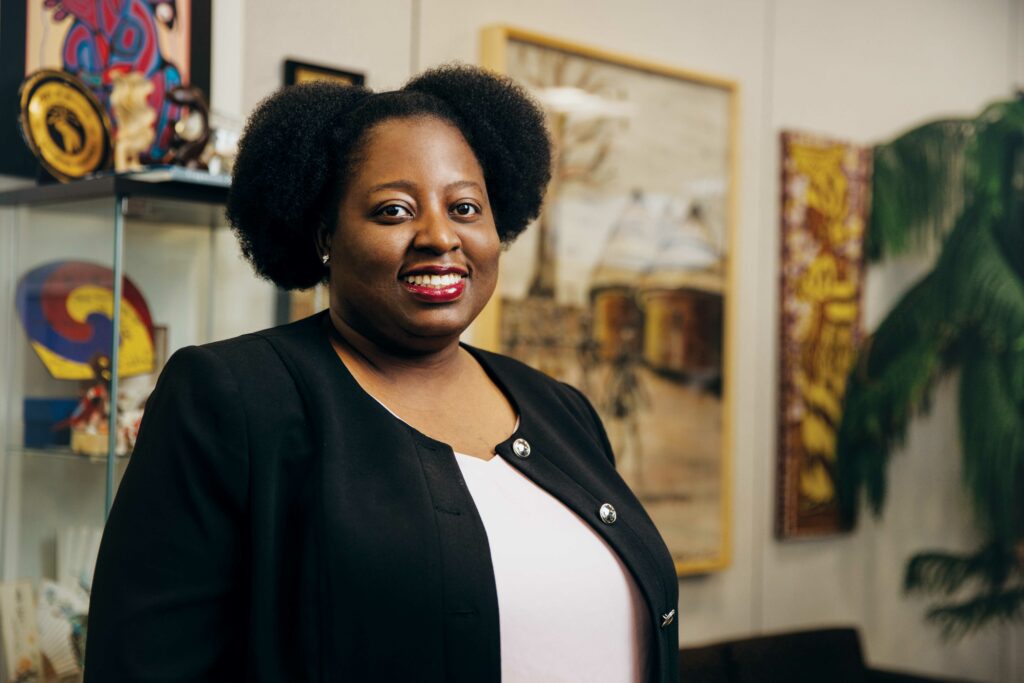 Many of us look at the prospect of relocating from one country to another as a potentially stressful experience. But can the act of immigrating and living in a new culture affect the mental health of a child? That’s the question that Dr. Bukola Salami, an associate professor in the faculty of nursing at the University of Alberta, has set out to answer — with the help of some funding from the Stollery Children’s Hospital Foundation in the form of two different grants.

The first of Salami’s two Foundation-funded projects through WCHRI, for which she received $40,000, was a pilot run of a “conversation café” initiative, in which parents who have immigrated to Canada from Africa engaged with each other to discuss their children’s transitions and any struggles they may face in parenting in a new cultural environment. Running in late 2018 and early 2019, the pilot project consisted of nine sessions, held at the Edmonton Intercultural Centre and the Edmonton Immigrant Services Association. The series of cafés was co-facilitated by African immigrants, health-care professionals and pediatric residents from the University of Alberta so that participants would get a balance of medical advice and cultural understanding. Salami’s hope is that, through these events, parents received a foundation that could help them to navigate the cultural differences between their old and new home countries and, by extension, provide the best possible support to their children as they struggle with the typical stresses that come with childhood and adolescence, without creating any stigma.

The second project, which received $50,000 from the Stollery Children’s Hospital Foundation through WCHRI, is a research study in which Salami and her team delved into data from the Canadian Health Measures Survey conducted by Statistics Canada. Salami found that when kids are on an even playing field, immigrant children experience equal or even better mental health than non-immigrant children.

“We also did interviews of immigrant parents to identify the factors they think contribute to the mental well-being of their children,” Salami says. “Some of the barriers they mentioned were limited access to physical activity programs, lack of information about the Canadian health-care system and being unable to navigate the system and understanding how the system works. For some there was racism and discrimination and they factored that into mental health, as well as language barriers and not feeling listened to by health service providers.”

Despite the findings that suggest immigration itself isn’t a detriment, immigrant children often do face different circumstances than non-immigrant kids and need some extra support. While immigrant children whose families are coming to Canada by choice are from relatively stable backgrounds by default (otherwise they would not be accepted by Canada’s immigration program), African immigrants are more likely than many other immigrant groups to be refugees or to have family members who have been involved in gun violence, both of which can cause significant mental trauma. Salami’s research will continue to look at ways that sub-groups of immigrant youth experience mental health issues and how the Canadian system can properly support them.

All of what Salami is studying falls into the Stollery Children’s Hospital Foundation’s mandate of helping to ensure that all kids, regardless of their background, are properly supported by the mental health care system.